The year's end comes alway very surprising - or so it seems. Suddenly all people come to notice what should long have been finished by now, and if those people are in charge, you can be sure you have your hands full of work. That's why I've managed to paint 2 (!) figures in the last four weeks, and my blog was in quiet tranquillity (as it befits the nearing holiday season).

Now it's about time for an update, and there are two important developments to report on: First I have the honour to be nominated for the famous "Liebster award" by the equally famous Christopher aka Axebreaker, to whom I'd like to express my gratidute for this great honour. Christopher is the same "wargame butterfly" as me with so many projects and hobby-objectives that reality often has a hard time to catch up. We're planning to organize a game together at next years AttritiCon in Ulm, but what it will be is a matter of discussion (and subject to change) yet. Rest assured it will be great - what ever we will finally decide on :-)

Back to the Liebster Award. As you all know by now, it has five rules, namely: 1) "Copy and paste" the award on your blog, and talk about it a bit. 2) Post a link back to the blogger who gave you the award. 3) Select for the award your five favourite blogs with less than 200 followers, leaving a comment on one of their post to notify them that they have won the award. You need also to list them in your own blog. 4)  Enjoy the moment, knowing that you have just made someone's day. 5) Of course, there is no obligation to pass the award, but it is a good deed really. 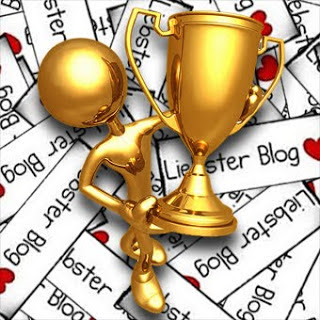 Now with that beautiful golden figure on my blog, it is time to nominate my own list of great blogs I like and visit. Well, first there's Simons' burgundian blog "Je Lay Emprins", dedicated to the development of his fantastic Burgundian Amry (mainly Perry figures). Fantastic work and very inspirational.

Also, I highly recommend "The Leutnants Diary" - it seems this blog was already nominated a few times for the award, but as it is so good I think it can handle another nomination.

Next on my list of recommendees is Jimbibbly's blog. James, the owner of the fantastic Oshiro range of Japanese buildings who always crowns the Salute in London with his fantastic Perry Samurai display, is a very nice person and so productive it puts shame on my meagre hobby-efforts...

Then there is the sensational - if German speaking - blog "Figuren und Geschichten" ("figures and stories") of Frank, presenting beautifully painted figures in fantastic backgrounds with well-researched or simply inspirational stories around them. Highly recommended to all German speakers and readers.

Last but not least I'd like to nominate the "Lair of the Uber Geek". It may have more thean 200 followers and thus does not qualify for the award, but I'd like to interpret this rule as a mere  guideline and thus ignore it. It is with great joy and amusement that I read Miles stories about figures, robots and his wifes parties, and more often than not I call my own wife over to the Laptop in order to enjoy together the fantastic stories of this very nice and sympathetic person - I hope I'll meet him in person someday.

There are many more blogs I'd like to nominate, but five is the rule - and if I would ignore all rules then where would we be? At your average wargame tournament obviously, but this is another matter.

Thus onto our next topic, the Napoleonic Wargames Event in Ulm. The idea was to have a themed gaming weekend, and to top it up with a little bit of history - namely a tour to the battlefield of Ulm/ Elchingen.


15 wargamers arrived from all over Germany, and whe played all things Napoleonic - especially with Age of Eagles (here our good friend Bodo has put up two great scenarios, you can read more about them (in German) here) and Lasalle. Personally, I hosted a big 28mm Lasalle Game...


and also played some 15mm Lasalle games with my Russians:


It was fantastic and I think we'll repead the event next year. Well, that's it for now, I hope there'll be another blog entry before Christmas. Have a good time, buy nice presents and enjoy the snow (I just came back from showelling some snow drifts in our yard, there is something to be said for "green Christmas"...)