My club's annual event, the AttritiCon, was tremendous fun again. The con was well recieved (we had something of a hundred participants and visitors this time), and it was a very relaxed and joyful atmosphere with people having big talks about little figures and playing old and new games. For me it was a first that I didn't play any tournament but helped staging two demonstration games - the best decision I could have made, as it was truly great.

One of these games was a big 400p Impetus demo in 28mm with Christopher aka Axebreaker. Christopher is a very nice person and a gifted painter, and the army he put on the table certainly has a very lasting "wow"-effect. Here he is, sitting in the middle and explaining grand strategy to the players: Facing each other on the Spanish plainland were my Andalusians (which you already know)...

The Scenario was a historical one, but we took liberties with the set up and added a Spanish Version of La Haye Sainte: 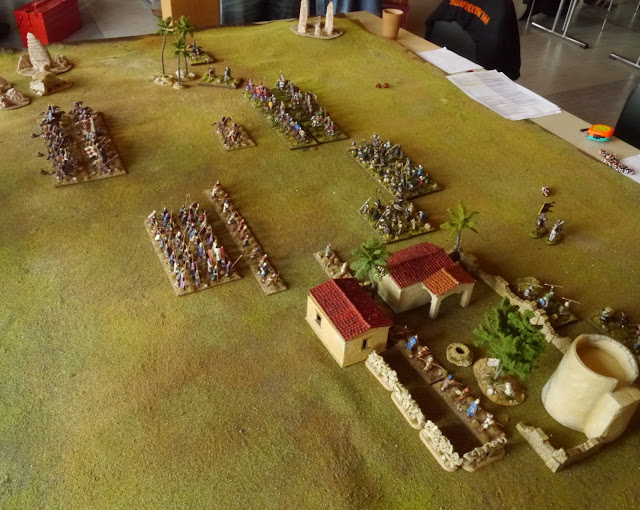 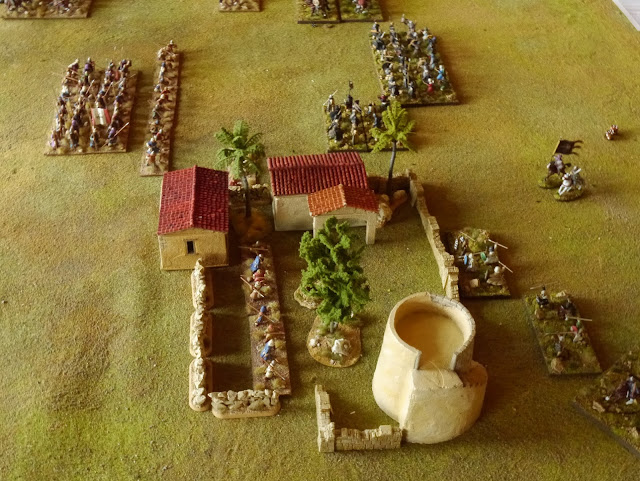 In two large battles the armies fought it out who would rule this part of Spain... 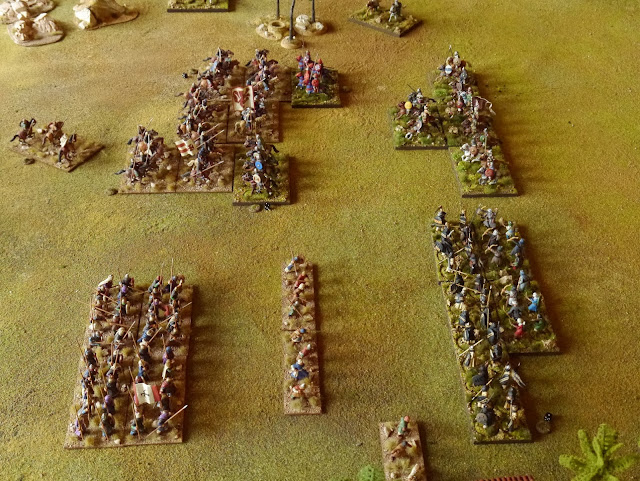 ... and there were plenty of heroic moments like with this mercenary knights in Andalusian service (bottom centre), who survived turns after turns of onslought by a overwhelmingly outnumbering enemy... 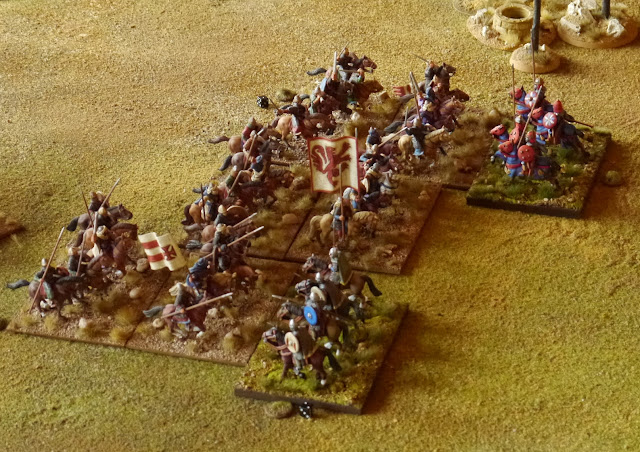 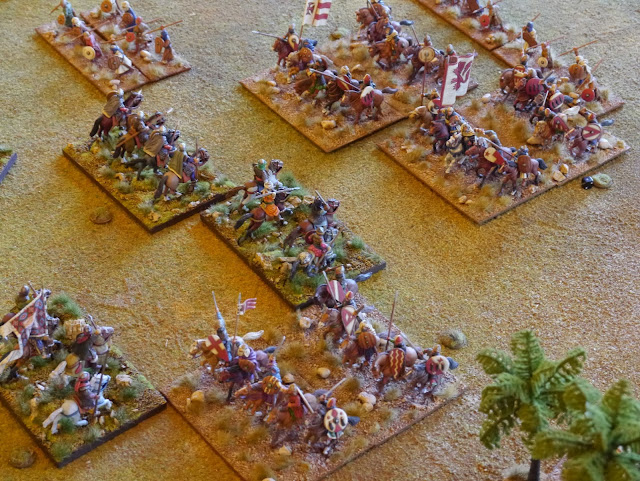 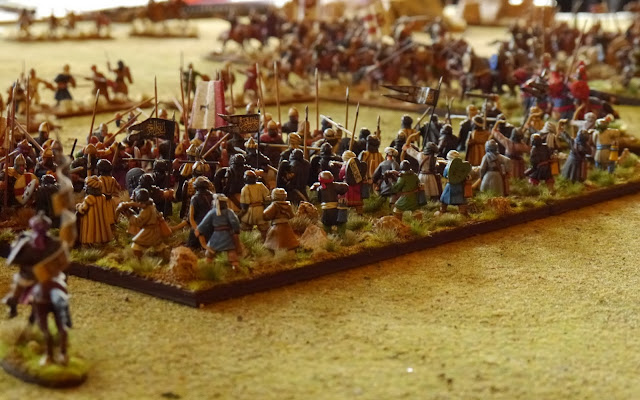 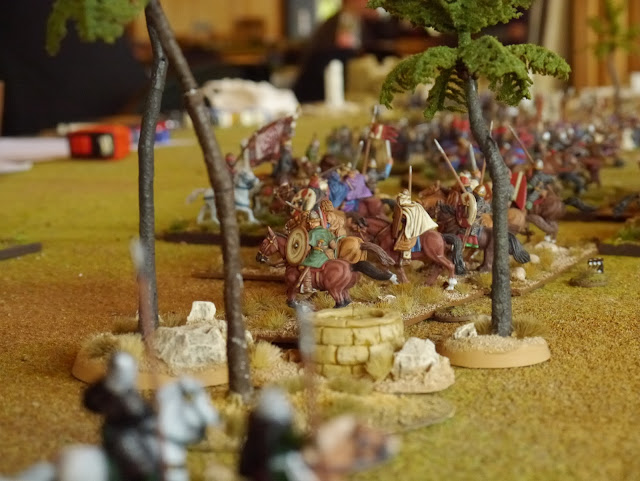 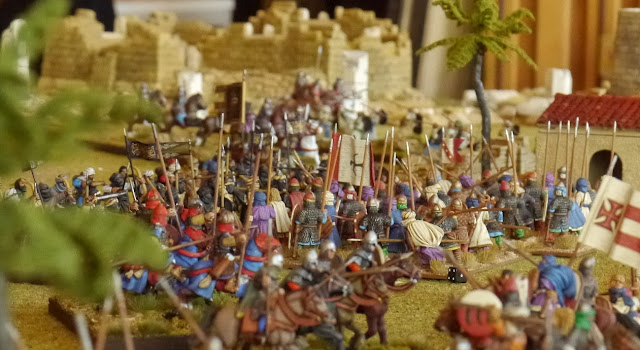 I can only say thanks to Christopher, who (since it was one of my first times playing Impetus) had the hard work of involving and explaining, while I was free to enjoy the figures and role some dice. What a great game it was. We're considering to do something like this again in the future, but for the moment we're both glad that we finished everything in time (and we both shrink back even from the thought of another such huge project...).

The other game was much smaller in figure-numbers but not in matters of fun. In our own adaption of the SAGA rules, Patrick alias "Wraith" and myself prepared a little scenario set in the end-struggles of the Imjin war: A Japanase colony is attacked by a Korean army, and in a limited number of seven turns the game is decided by the number of buildings burned by the Koreans or defended by the Japanese. For those interested, I have made available the Korean Battleboard for download.

Patrick is a very nice person and great fun to game with, and his Samurai troops are truly a feast for the eyes. Here is the master of the games... 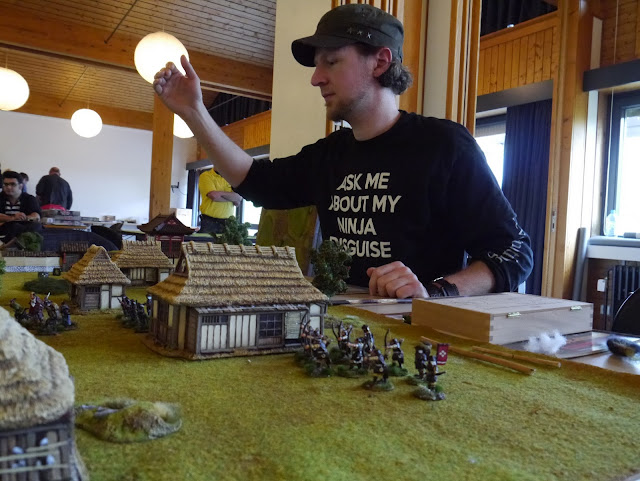 ...and here you can see some of his very beautiful troops: 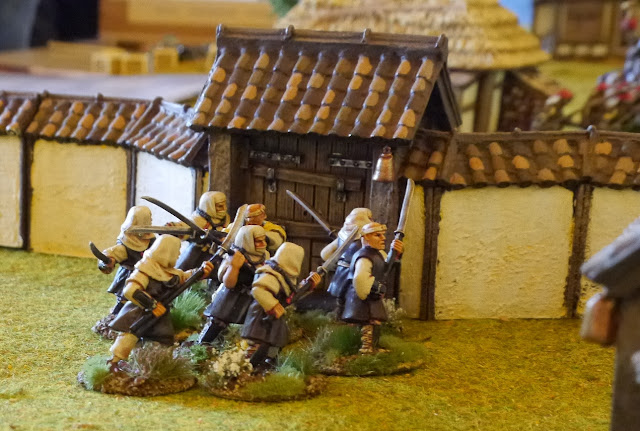 I myself added the scenery (the buildings are John Jenkins Design) as well as the Koreans: 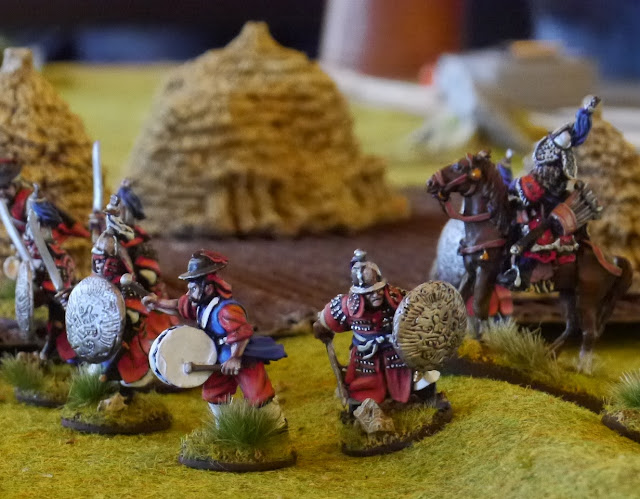 The scenario was played five times that day. Everytime the fighting was tough... 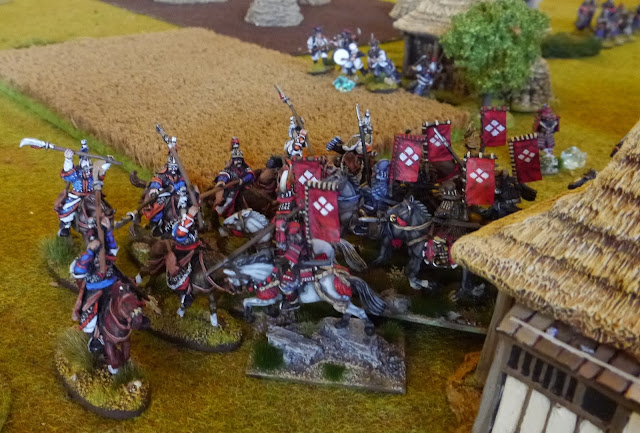 ...and both the scenario as well as the battleboards proved to be well balanced, as the results of the battles were quite different. The only thing that didn't differ was the fun the players had: 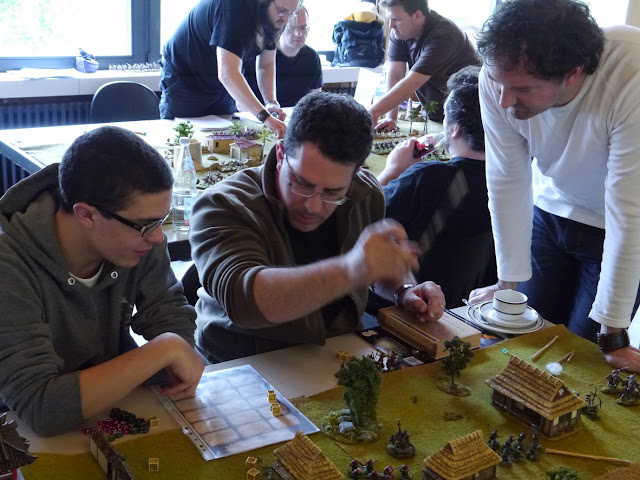 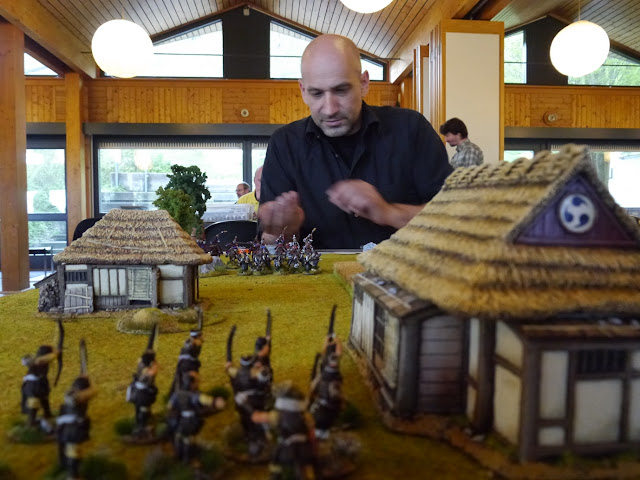 Here are some more shots of the battles in progress: 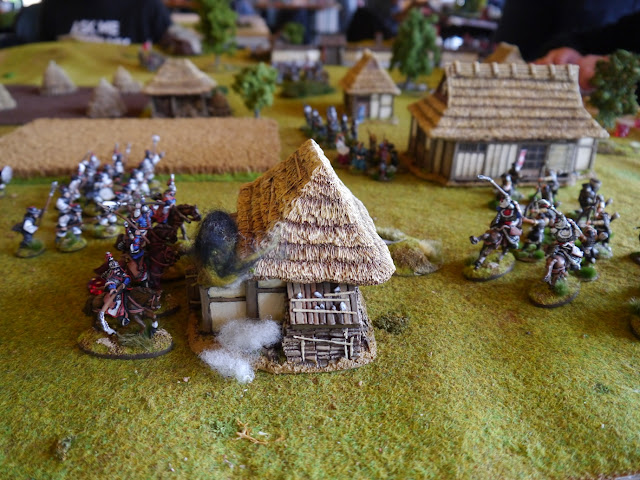 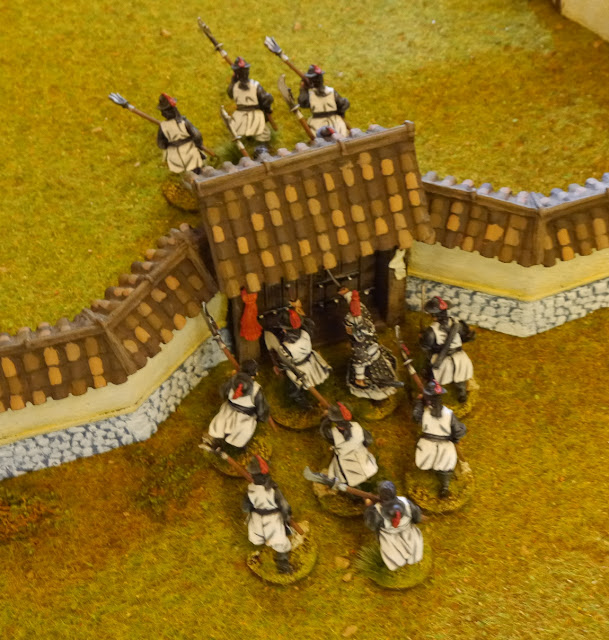 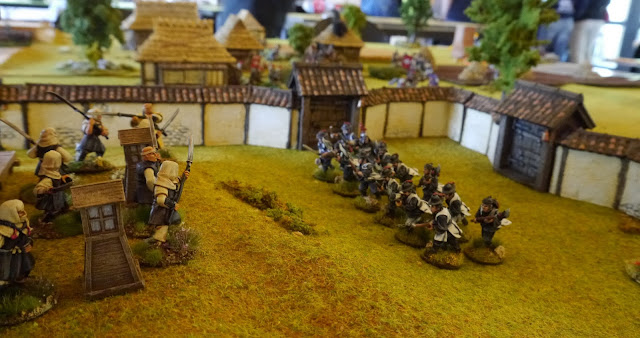 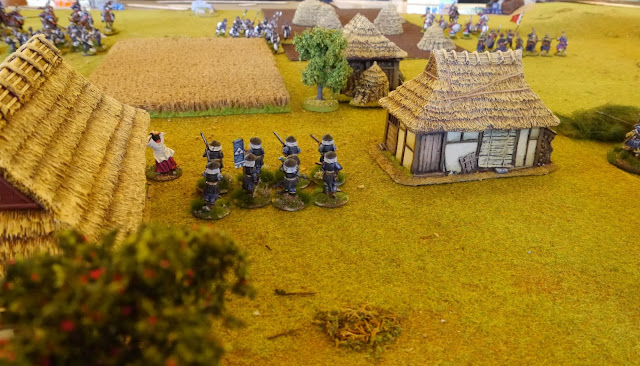 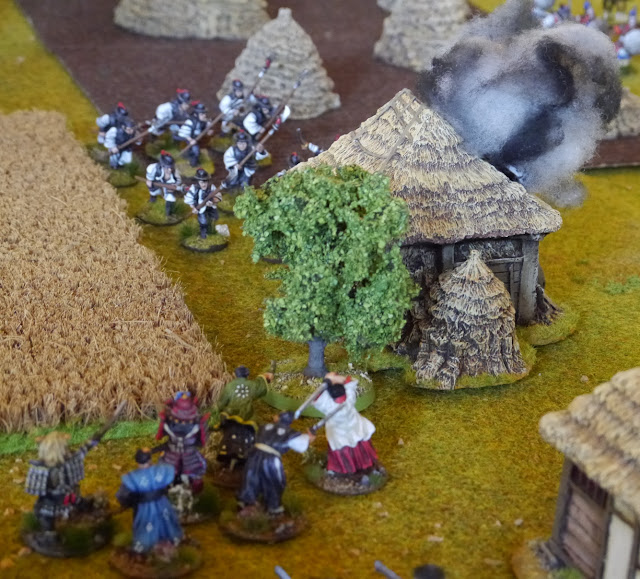 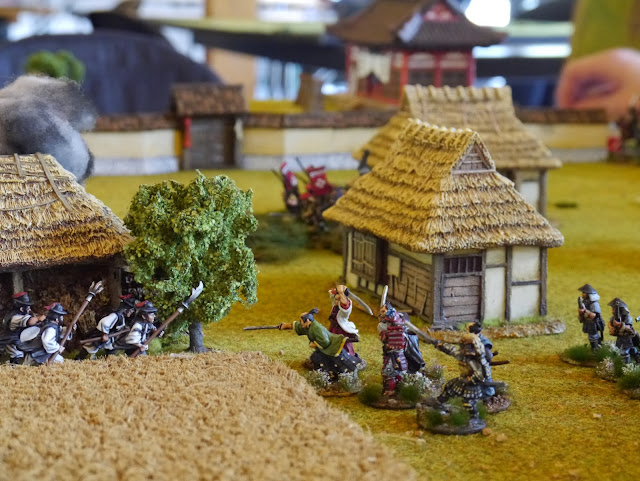 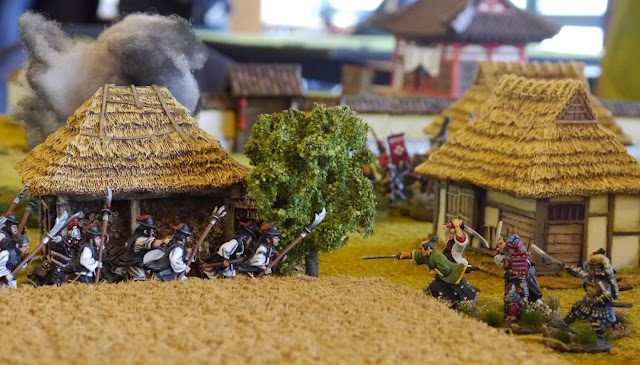 My heartfeld thanks to my both co-organizers and hobby friends - as well as to all the players joining in. It was so much fun!

Now I'm back at my painting table, and it feels so good to be free to paint anything I want without having to keep a shedule. Alas, as gaming events like these are known to be the petri dish of hobby inspiration, a new plan and shedule will emerge soon enough... But more of this some other times.

All the best to you and thanks for your visit,
Tobi
Eingestellt von Sir Tobi um 13:37